Seed that takes root, when we bring the fortress down, we are the…

Interview with Starhawk by Reclaiming Quarterly

RQ: I associate Rising of the Moon with the globalization actions of the 2000s.

Starhawk: This is a song we’ve used a lot in political actions, in the streets. It’s a nice one to teach to activists. People really like the sense of bringing the fortress down – stamping down as they sing.

RQ: Did you write it for a specific action?

Starhawk: Yeah, in 2002, the G8 met in Calgary. We had a Pagan Cluster that went there to organize. We had a full moon ritual right before the action at a Unitarian church which had a labyrinth, and I felt like we needed a new chant. I was walking the labyrinth and preparing for the ritual, and came up with that.

We got to doing a lot of magic around the organizing. At first it seemed like the action would be really scary. These “terrible anarchists” were coming to town, and there was this big militarization around it. We did some magic where we set a magical drain for fear in downtown Calgary, and it seemed like things turned around. Suddenly the cops were all in bicycle shorts –

RQ: It’s always a good sign when the cops are in bicycle shorts!

Starhawk: So there was a big march, and nobody got arrested. It was a very successful first day of actions.

Then we had a second day. Like most mobilizations, we’d spent months planning the first day of actions, but no one had planned the second day. So we did a group trance about it.

Starhawk: Somehow in the middle of the trance I was reminded of this vision that I’d had the one and only time I ever took ayahuasca. I had been invited to this ecumenical conference in Brazil. Everyone was doing their different rituals, and I was invited to a Santo Daime ceremony.

You’re supposed to go in with a question. The question I went in with was, “Do we have enough time to make all the changes we need to make?”

I had been asking religious leaders (at the conference), and getting various answers.

I asked the ayahuasca, and it said “No! But you’re a witch — you can work outside of time. Part the curtains of time, and plant the changes in that timeless place where they’ve already taken place.”

Then I had a vision of this huge fortress, overpowering, soldiers and clone-like robocops coming and coming. But when I looked, it was all cracked and brittle. And I heard “the fortress falls, and the ground beneath it shifts.”

RQ: So you brought this vision to the Calgary protests?

Starhawk: Yes. At the G8 protests in Calgary we worked with this image of the fortress, with vines and leaves pushing through the cracks and breaking it apart.

RQ: Which is the theme of the song. What was the actual protest you did?

Starhawk: We got this idea that on the second day of actions we would do Mud People, which is something a bunch of crazy artists and dancers were doing in SF. They’d go down to the financial district, strip off almost all their clothes, and cover themselves with mud. Once covered with mud, the rule was, you couldn’t walk normally or talk. So they’d be grunting and writhing through the financial district at lunchtime as an art piece.

RQ: I remember being part of a mud people action at California Witchcamp around 2000.

Starhawk: Right, Beverly brought this to witchcamp. So periodically, when we were having some deep consensus meeting, mud people would erupt and start crawling around stark naked.

We had this idea to do it in Calgary. Well, Calgary is like the Texas of Canada. All the oil companies are there, it’s the most conservative place in Canada.

We had 60 crazy people who stripped off their clothes and dove into the mud. A few of us were like, I don’t think I’m going to get naked and writhe through the streets of Calgary. I think some of us need to be able to talk.

So we started to write a flyer, and I suddenly said, this doesn’t call for a flyer – this needs a prophecy!

I was in a spiral dance with Pagan Cluster people just back from the Calgary action. Every time we got to “bring the fortress down” they’d cast their hands downward – which in a spiral dance is rather jarring!

As we were recording Campfire Chants, I was part of a late-night song circle at 2016 Jewitch Camp. I started by sharing  We Are the Rising Sun (Song 3 on this album).

Someone who had no knowledge of our not-yet-released album said, “That’s a beautiful song about the vision we’re struggling for. But life isn’t all about beauty. Sometimes we’re really angry. I want to share a song about those moments.”

And she launched into Rising of the Moon. 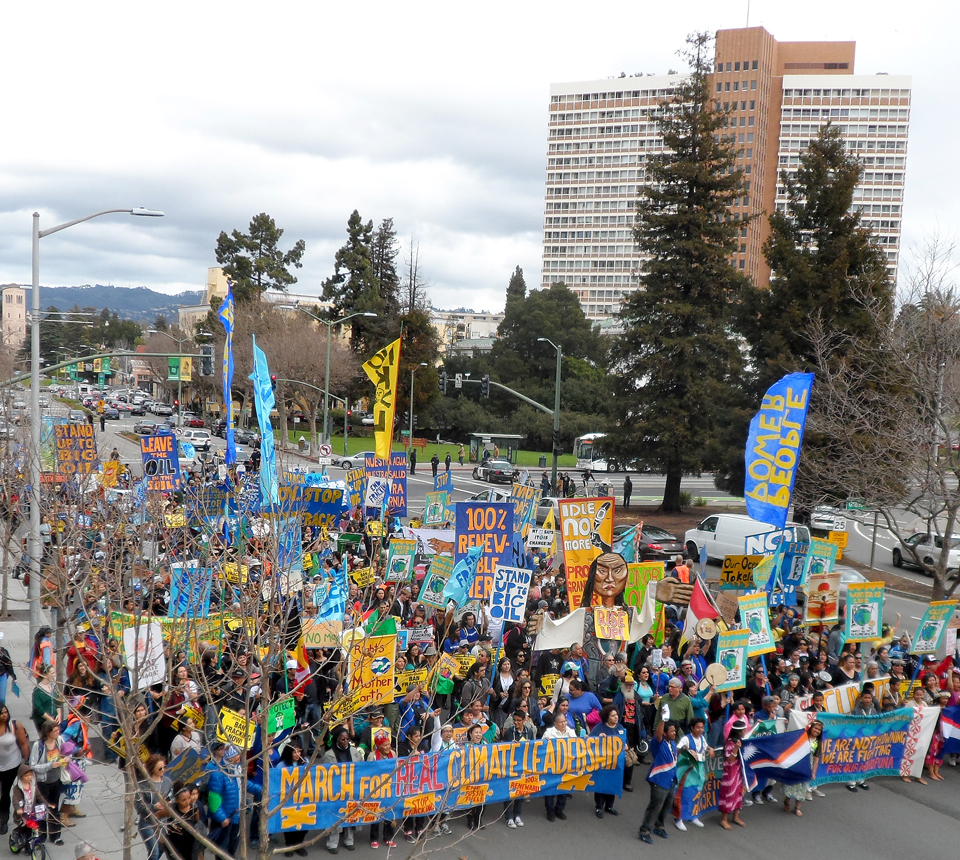 Top: Solstice in the Streets, San Francisco 2011 – the moon rises over a cone of power outside energy profiteer PG&E. Photo by George Franklin/RQ Archives