Let the beauty we love, be what we do

There are hundreds of ways to kneel and kiss the ground

Lyric adapted from a poem by Jalāl ad-Dīn Muhammad Rūmī and translated by Coleman Barks:

Today, like every other day, we wake up empty and frightened.

Don’t open the door to the study and begin reading. Take down a musical instrument.

Let the beauty we love be what we do. There are hundreds of ways to kneel and kiss the ground. 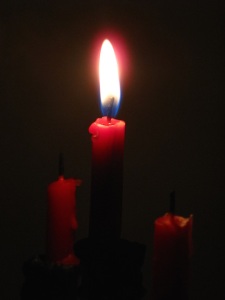 Interview with Alphonsus by Reclaiming Quarterly.

RQ: Was Let the Beauty written for a specific ritual?

Alphonsus: I didn’t “write” the song. I found a way to take a poem and give it legs. I want to say it was at Missouri Witchcamp, maybe 15 years ago.

I’d been discovering Sufi ecstatic poetry. I look at these poems and there is an initial “aha!” But also a real challenge – it would kick your ass if you really understood this poem!

I was seeing that there was this long historical lineage. Here I was, reading some person’s words from the distant past, and I was like the new kid on the block. Reclaiming was a new spiritual path, we’re singing around the fire – and these words are so in alignment with the spirit we are trying to conjure.

RQ: You used the word “lineage.”

Alphonsus: There is a gravitas, a legitimacy. People from other parts of the world, from long ago, who were revered – and we’re saying what they’re saying. It wasn’t about trying to be Sufis. It’s about breathing into heart space, wishing the world well, not getting caught up in material means.

I was looking at these words and I thought, it speaks to such a beautiful mind-state, such a nice feeling-state. It’s so inclusive: “There are hundreds of ways to kneel and kiss the ground.”

It affirms everyone in such an inspiring way.

RQ: Where did the melody come from?

Alphonsus: I didn’t want to sing the whole poem, just that one line. I thought, what’s the feeling here? I hummed, and a tune came. It just fell out that way.

Sometimes I come up with a song, and a month later I think, I like these words, but there’s a different melody.

But with Let the Beauty, I remember it coming out really naturally. The muse came to me. And more people know the line because it’s sung.

RQ: What’s it like to “write” a chant that people love, yet they aren’t your words?

Alphonsus: It’s a funny thing about the folk tradition – ownership. You feel grateful that something has come through you. Other people are singing this song, its very affirming of your own creativity. It’s passed some test if other people also want to sing it.

I was at a witchcamp where someone started singing Let the Beauty We Love, and didn’t say who it was by.

And I thought: That’s my song that I didn’t write!

At our late-night campfires at California Witchcamp around 2000, (in between songs and rounds of Truth or Dare), Alphonsus would drum and recite fragments of Rumi poems. The lyrics of this chant often formed the final words of a free-form Rumi improv.

This is a favorite chant at Reclaiming rituals and classes. Once we sang it at two San Francisco rituals in a row, because the first time, when we were at the beach, it didn’t sound so great. We wanted to get it right.

Teen Earth Magic Workbook – not for teens only!

Dancing the Spiral: A Companion to the Writings of Starhawk